How To Solve a Trillion-Dollar Medical Problem With Data

“Our machines can help make the same decisions as intensive care units do, to keep people out of hospital before things have gone wrong,” Kreindler, cofounder of the Centre for Health and Human Performance (CHHP) and Jointly Health, told the audience at Wired Health. “Complex chronic disease is crushing economies. We need to know how to make these decisions in people’s homes, how to monitor them and take observations from loved ones and caregivers.”

The doctor specialised in altitude physiology, but also had a background in IT. While working at the CHHP, mainly with sports players or helping people achieve seemingly impossible physical feats (Eddie Izzard running 43 marathons in 51 days, for one), Kreindler realised the vast amounts of data they were collecting in order to help people optimise performance, could potentially be applied to prevent illness. In a world where a supercomputer is diagnosing cancer and there has been an exponential acceleration in the power of devices and a proliferation of wearable sensors, the stars appear to be aligning for a healthcare model built on prevention.

At Jointly Health, wearable biosensors already in existence are combined with machine learning techniques to develop the world’s first CE marked and US FDA-approved wireless biosensors analytics system for personalised clinical decision support. Kreindler mentioned intensive healthcare units, because it is that type of focussed analytics Jointly Health wants to excel in and replicate for ordinary people. It wants to use natural language processing and machine learning — taking information supplied by clinicians, patients or their caregivers — and data to build a computer system that is as reliable, effective and fast at predicting outcomes as a whole team of doctors, nurses, consultants and machines. 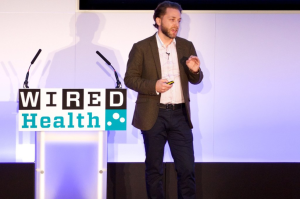 “At CHHP we get tonnes of data and monitor that on a regular basis in realtime to tune outcomes — we asked, why can’t we use this to tackle some of bigger problems in complex and chronic disease? Today regulatory approvals do not allow personalised data streams to be turned into actions.” Kreindler wants to change all that, and believes it’s the only way to achieve the kind of cuts being talked about today — for the NHS in the UK, that’s £50 billion in savings by 2020.

One of the sensors being used is a small plaster that costs ten dollars, but can measure heart rate, respiration and more, creating data streams that are uploaded to help others make clinical decisions. Jointly Health has built a device and app agnostic platform that can pull in any data to add to this. “It tells doctors what machines are seeing, which are things they can’t see themselves. It means we will be able to predict, far in advance of normal methods, personal patterns, allowing us to make better decisions outside of hospital.”

The ultimate outcome: hopefully to save lives and money the world over.

“It’s a global challenge that needs clever people, some of greatest forward thinkers in natural language processing, those looking after patients and the power of exponential advances,” Kreindler says. “Don’t underestimate the power of computational medicine, or the power of yourselves.”